The Miracle of the Cow!

We moved onto a small farm a few years ago as complete newbies to farming. My grandfather gave us a house cow as a house warming present. Her name was Possum and I learned to milk her by hand. We formed a very special bond, she was such a beautiful and  gentle creature.

One morning in the middle of winter something woke me out of a deep sleep at five o'clock in the morning! It felt like a subconscious nudge.
I leaped out of bed (very unusual for me particularly on a dark and cold morning), pulled on my dressing gown and rubber boots and rushed outside into the rain. My husband thought I has taken leave of my senses!

It was still dark outside but something told me to go the front paddock and when I got there I found Possum had fallen over and was on her back with her legs in the air!
I had been told a few months before that when this happens to a cow they cannot breathe properly or get up by themselves and they die.
I rushed over to her and miraculously I knew how to get her up .
I am 5 foot tall, rather a small person but I sat on the ground behind her and used the strength in my legs to push against her back; and pushed her up! After she got up. she moved toward something on the ground that was moving. It was her newborn calf, she had fallen over while giving birth!  She proceeded to lick the calf and it wobbled to it's feet and began to feed.

During the whole rather daunting experience I could feel the presence of a guiding and protecting force that enabled me to save the lives of Possum and her calf.
Posted by Angelpix at 02:17

Archangel Raphael offers healing to all those in need.

Angel of Rebirth and New Beginnings by Glenyss Bourne

See every day as a newly birthed miracle,a golden opportunity to express your True Nature. Reik is healing with the Energy of Unconditional Love 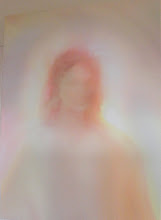